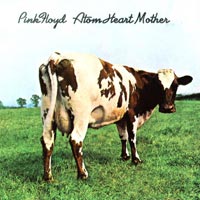 Something of an enigma among their work, this is the one Floyd album which doesn't have the trade mark "Pink Floyd Sound" be it the cosmic / nursery rhyme feel of the Syd Barrett era or the tight, lyrics dominated Roger Waters era.

This is largely due to the influence of Ron Geesin who co-wrote the title track and the use of brass instruments and a choir to add texture and colour to the sound.

The album opener, "Atom Heart Mother Suite" (side 1 of the lp) is a 23 minute epic. Apart from its length and the fact that it is largely instrumental, it bears little resemblance to "Echoes" from the "Meddle" album. Whereas Echoes was built largely on the quality and texture of sound itself, beginning with that repeated and distorted keyboard note, AHM is based on musical themes which are repeated and developed in the classical style throughout the piece. The musical themes themselves are both noble and grand in nature and the Suite is, quite simply an astonishing piece of music which is comparable to such modern classics as Holst's "The Planets".

Side 2 of the lp consists of three songs, "If", "Summer of '67" and "Fat old Sun" written by Waters, Wright and Guilmour respectively. While none of them can be described as "high impact" songs, all three have a haunting simplicity and the best lyrics up to that point. "If" is memorable as Water's first "list song" and includes possibly his first references to insanity : "If I go insane, please don't put your wires in my brain", and "Fat Old Sun" is a beautiful sleepy Guilour effort. In my opinion these songs are all stronger then the short songs from Meddle.

The album concludes with "Alan's Psychedelic Breakfast" another instrumental suite punctuated by sound effects and a backround voice. The music is not as strong as the title track, but there is that certain "something" about it (and the album as a whole) that keeps me coming back for more.

This album is unique and a "must" for any serious Floyd fan. For those who know Pink Floyd solely through lyric dominated albums such as "The Wall" and later "dehydrated" Floyd albums, however, it may come as something of a shock.