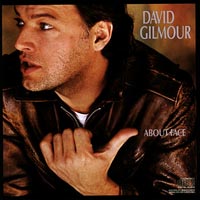 Let me start by saying that About Face proves that no one member of Pink Floyd is responsible for their unique sound. Rather each member contributed something to the Pink Floyd sound.

Each track on the album contains fragments of Pink Floyd, particularly "Murder" and "Let's Get Metaphysical." Anyone who has heard Gilmour's first solo album will probably agree that it didn't have much of that great Floyd element to it. This album is totally different (thus the title "About Face?").

As a dedicated Pink Floyd fanatic, I grow tired of hearing about Roger Waters' lyrical talents and their superiority over those of David Gilmour. Waters certainly is a fantastic lyricist. However Dave proves his abilities with songs like "Cruise" and "Near the End." His lyrics may not be quite as profound as Roger's, but they are still clever and thought provoking.

As Pink Floyd songs go, all ten tracks of About Face are relatively short. The longest, "Near the End," clocks in at 5:36.

All in all, I love About Face, and recommend it to any and all diehard Floydians. However, if you prefer Roger Waters' style to David Gilmour's, this obviously isn't an album for you. I give it an 8 out of 10.