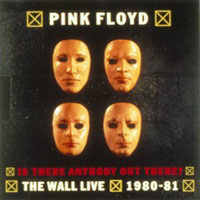 Is There Anybody Out There: The Wall Live Album Review

Well, I finally bought it. And altough it was expensive like hell, damm it, it's worth it. The sound quality is excellent, and Gilmours guitar is without a doubt the best of all. But...I kind of expected something else, I don't know exactly what. Maybe it's the fact that it's too much like the studio album, I think. Except for a few moments, when a longer solo is played, or a new song is added, the rest is EXACTLY the same, I'm afraid. Even the sounds and noises are the same from the studio album. Only the crowd sounds (fake?) really tells me this is a "different" album that the one I already own.

The notes are the album's gold. Gilmour's are the best, I think. Very honest and even provocative, like when he says that his songs "are the high points of The Wall - but then I would think that, wouldn't I ?".

Wright's notes are great too. He tells the truth about what was happening between him and Waters during the time and calls it "a very difficult and sad time for me".

A great album, even if only for the historical point of view.

Joao Solimeo, from Brazil (yes, there are a bunch of PF fans down here!)