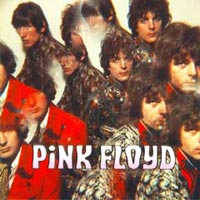 The Piper at the Gates of Dawn Album Review

Significantly, "The Piper at the Gates of Dawn" (the debut album of Pink Floyd) was recorded at the same time as the Beatles' ground breaking "Sgt Peppers Lonely Hearts Club Band". Those who believe that "Pepper" was the album from which all creative and experimental rock music followed should give "Piper" another listen.

Syd Barret, founder member, chief composer, lyricist, lead guitarist, lead singer and without doubt the most talented and creative member of the band ever, is the force behind this magical album which is his masterpiece. It includes songs with beautiful "nursery rhyme style" melodies, supplemented by haunting lyrics which evoke an aura of the naivety and simplicity of childhood pleasures and memories, but with the threat of evil constantly lurking in this apparent paradise. Songs such as "Matilda Mother", "Flaming", "Chapter 24" and "The Gnome" have melodies that give the impression of having been sung by children since time began, while "Bike" is uncompromising in its originality and gives a frightening and eerie portrayal of latent insanity.

The opening track, "Astronomy Domine" is also a stand out track with a spacey / trippy feel. This track was later extended on the live disc of "Ummagumma".

The long intrumental "Interstellar Overdrive" was a recording which attempted to recreate what the Floyd were doing on stage at the time and is esentially a lengthy a-tonal, arhythmic and unstructured jam. I personally find it unlistenable apart from the introduction and climax at the end - I believe one had to have "been there" to get any enjoyment from it; although there are many who would call my opinion "heresy". The other instrumental "Pow r Toc h" has structure and humour and I find it altogether more pleasing.

The Roger Waters penned track "Take up thy stethoscope and walk" is mediocre - you are not going to find the roots of "The Wall" in this one!

Like all debut albums, this one is essential for any serious fan of the group. Those with no knowledge of the Barret era may hardly recognise this as Floyd, but I am nevertheless convinced that they will grow to love its charm and magic. While Syd Barret went on to create one more masterpiece "The Madcap Laughs" this remains for most Floyd fans the high point of his tragically short career