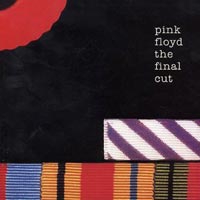 - In this message I will be submitting a review of the Pink Floyd album 'The Final Cut'. The Final Cut was released in 1983, and was written entirely by Roger Waters. Many people refer to this album as the first Roger Waters solo album, but I must disagree. Although Roger Waters did write the entire album, and Richard Wright was not present for it, I think it is a genuine Floyd album.
- This album deals with many issues that are very personal to Roger Waters. It deals with Roger's anger, and frustration with the way that the British government dealt with World War II, as well as his disgust with the over state of the British economy. It is, on many levels, a personal album for Roger, as it is dedicated to Eric Fletcher Waters, his father.
- But as I said, many people dismiss this album as a good Floyd album due to Waters' dominance of the album. I must disagree. The music on this album is very emotional, and reflects very well Roger Waters lyrical meanings. But the music would not be so effective if it were not performed by people who have been around him for quite a long time and those people are David Gilmour and Nick Mason. Now, granted that Nick Mason is not a profound drummer, Gilmour's guitar work, and finesse accentuate the highs and lows and the music that he plays. Whether or not Gilmour wrote the music will not reflect his performance, and interpretation of it. 'The Final Cut' is a brilliant example of an excellent Pink Floyd album, and it not to be dismissed for any reason.