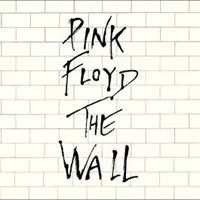 First of all, I'd like to say that I am reviewing the deepest, hardest Pink Floyd album there is (and maybe the hardest album in the world!). The is no one set interpretation of The Wall. I will attempt to give my thoughts on the album. These thoughts exclude the contents in the movie, as I believe the album is better listened to than watched.

I believe the album tells a story about someone going through the journey of life. It is not just a person though. It is a symbol of something that is within all of us. The Wall is not about one particular wall. It is about many walls. It describes the person's dad going off to war (this is a wall that the protagonist must face). It then describes the persons school life. This shows the wall between the teachers and students. Later, the relationship wall between the protagonist and a girlfriend. This continues throughout the album. It seems to me that this person is a product of society, and has been shaped and molded by the world. However, he has never been in total understanding or communication with the world; thus, the wall. On the second half of the album, the theme seems to broaden to a more general idea. Instead of personal walls, it goes to complete races and groups of people, i.e., the genocide of the Jews by the Nazis. The Wall is a complete picture of the conflicts, misunderstandings, and imperfections of the world.

Now, that was the general interpretation. A more specific interpretation is hard to come by. I have struggled with this for some time. It is hard to achieve a specific story without referring to the movie. In the beginning during a concert, a rock star has a flashback of his life. He looks back into his childhood. He remembers his dad dying in World War II. He remembers the strict martinets in school, and the hippy culture and rebellion that took place as well. He remembers living on the edge. He breaks down and loses everything, begging for help from anyone. He calls old friends, but no one is there for him. He then gets drugged up again to ease his pain. Somehow, unconsciously, he breaks the law. Finally, the authorities catch up with him. (This is where I get really confused with the song, "Waiting for the Worms") Somehow, he is back at the concert again. Perhaps the flashback is over now, and we are now seeing the events as they happen. "Waiting for the Worms" is all about WWII and the final solution to a superior race. I'm not sure how that fits in. Anyway, he is sitting in jail awaiting his trial. The trial turns out to be totally against him. It almost reminds you of an inquisitional system instead of adversarial. If the person's goal was to build a wall between him and society all his life, then this was shattered at the trial. The judge ordered that he be destroyed by society. All that believed in him turned away except for a few. The album in a specific perception seems to be a tragedy.

This is my current interpretation. Please be aware that this changes almost every time I listen to the album. For me, it is a very personal thing that everyone must seek for themselves. I believe Pink Floyd wanted people to think for themselves. They wanted people to interpret music in their own way. I am merely giving this review to share my thoughts on what I believe is the best album ever written.

From a musical standpoint, I believe it is still one of their best! The sound quality is unreal. The timing of the sound effects and panning effect through the stereophonic system is impeccable. It is no doubt a masterpiece that touches my soul immensely.